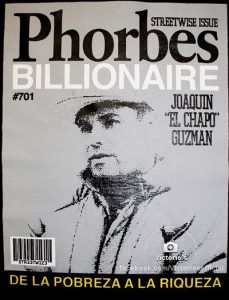 For decades, if you came across a pinch of cannabis in the U.S., odds were good it came from Mexico. Moreover, it was probably smuggled across the border by someone affiliated with a massive and often violent criminal enterprise.

Medical and recreational legalization in the United States has caused a market crash in Mexico. According to an article this week in the Los Angeles Times, prices in some areas have tumbled as much as 70 percent.

Growers in the state of Sinaloa, one of Mexico’s biggest production areas and home to the infamous Sinaloa Cartel, told reporter Deborah Bonello the amount they make on cannabis has fallen over the past four years from $100 per kilogram to $30.

That’s taken a toll on traffickers, too. Officials on both sides of the border say the drop in profits has curbed both production as well as the amount of cannabis smuggled into the U.S. by cartels.

“Changes on the other side of the border are making marijuana less profitable for organizations like the Cartel de Sinaloa,” Antonio Mazzitelli, the representative in Mexico for the United Nations Office on Drugs and Crime, told the Times.

Only a few years ago, cannabis comprised as much as 20 to 30 percent of cartels’ revenue from drug exports, according to estimates by the Mexican Institute of Competitiveness and the RAND Corporation. So a falloff in profit is likely to hit organized crime hard.

As recently as 2008, about two-thirds of cannabis consumed in the U.S. came from Mexico, according to RAND. Current estimates peg that figure at approximately one-third. That’s likely caused by two factors: increased production north of the border and scaled-down operations by growers and smugglers in Mexico.

“The big argument for drug legalization is reducing drug cartels’ power around the world,” wrote Vox in response to the Times story. While it’s certainly not the only reason to legalize — let’s not forget the thousands of Americans behind bars, racial disparities in the enforcement of cannabis laws, or the risks faced by patients who must still obtain medicine illegally — dealing a blow to ruthless drug cartels is a cause that should rally both government officials and cannabis users.

Free-market economics have long stymied the war on drugs. Efforts by the Mexican government to encourage farmers to grow legal crops fell flat because high profits from cannabis cultivation were so appealing. But it now seems market forces may actually be curtailing illegal activity.

On top of all this, Mexico is currently considering changes to laws that would legalize or decriminalize cannabis. That could further reduce cartel profits by adding small-time growers and smugglers into the mix, the BBC reported last month.

But while piecemeal legalization in U.S. states has reduced cannabis payouts to cartels, experts say that so long as federal prohibition in the U.S. continues, trafficking by organized criminals will persist.

“If Mexico legalized marijuana production for domestic consumption and exports to the U.S. remained illegal,” RAND Drug Policy Research Center co-director Beau Kilmer told the BBC, “there would still be incentives to smuggle marijuana to the U.S.”