For the last 80 years, cannabis has been identified as Public Enemy Number 1, said to promote lude behavior, encourage violence, and drive people into states of rage.

Fortunately, these social and political arguments have yet to be backed by any real science.

The cannabis plant has been a part of human history for millennia.

As one of the oldest agricultural and economic crops, the human species has used the plant to fulfill just about every basic need, food, medicine, clothing, and shelter included.

While the herb has long been blindly considered a public health enemy, recent epidemiological research has found that public access to the plant may have several meaningful benefits.

According to the latest research, here are 7 ways cannabis reform can benefit public health:

Rates of binge-drinking in the United States have gone up over the past decade.

Loosely defined, a night of drinking is considered a binger when at least four glasses of alcohol are consumed within a two-hour period.

In fact, research published in the American Journal of Public Health found that between 2005 and 2012, binge drinking increased by 8.9 percent.

While it’s easy to get carried away in social situations, drinking too much in one sitting can have some serious consequences.

According to the Centers for Disease Control, binge drinking has been associated with a wide variety of public health problems, including increased violent behavior and sexual assault.

Fascinatingly, research suggests that cannabis may be able to combat some of this behavior.

A report published by the Wall Street investment firm Cowen & Company found that states with adult use cannabis laws saw a reduction in binge drinking rates by 9 percent below the national average.

Compared with non-legal states, rates of binge drinking fell by a whopping 11 percent.

Why? Cowen & Company suggest that cannabis acts as a substitute for alcohol as a social lubricant.

Unlike alcohol, however, the herb is not associated with debilitating long-term side effects.

2. Swapping cannabis for alcohol may reduce risks of dementia

Speaking of binge drinking, the Centre for Addiction and Mental Health has found that heavy alcohol consumption is one of the primary risk factors for dementia, particularly early-onset dementia.

“The findings indicate that heavy drinking and alcohol use disorders are the most important risk factors for dementia,” says study co-author Jürgen Rehm, “and especially important for those types of dementia which start before age 65, and which lead to premature deaths.”

As Rehm mentions, dementia and brain damage caused by alcohol are entirely preventable at the individual, community, and policy level.

While meaningful public health research is sorely needed, cannabis reform may be a major policy contender when it comes to reducing the occurrence of alcohol-induced brain damage.

Not only is binge drinking down in legal cannabis states, but preliminary rodent and cell line research suggests that cannabis has potent neuroprotective properties.

These neuroprotective properties include reduced inflammation in the brain and can potentially protect against the death of brain cells in patients with neurological diseases.

Should these findings continue to hold true in human trials, the cannabis plant may one day play an important role in the future prevention of neurological diseases.

3. It is impossible to fatally overdose on cannabis

Unlike many other recreational substances, including alcohol and other drugs, it is impossible to fatally overdose on cannabis.

While cannabis compounds actively affect cells in the brain and throughout the body, the receptor sites responsible for the herb’s intoxicating effects are mysteriously missing in the brainstem.

Why is this important? The brainstem holds the machinery that controls respiration.

Cannabis is often referred to as a “drug” when discussed in policy and public health settings. However, unlike most substances of abuse, it is impossible for the herb to slow breathing to the point of death.

As a result, there have been no known fatal overdoses from the cannabis plant.

A well-known 2014 study found that that access to the herb reduced rates of opioid overdose by a whopping 25 percent.

In a more comprehensive follow-up study, researchers discovered that having easy access to the plant via dispensaries decreased overdose rates even further.

While there has been significant public health focus on cannabis and drug addiction, early research suggests that the herb may have other benefits as well.

Epidemiological research published in 2011 found that cannabis consumption was correlated with reduced rates of obesity.

Research published in the British Medical Journal a year later discovered that cannabis consumers were less likely to develop diabetes.

Adding more fodder to the fire, the American Journal of Medicine found that those who partake in the herb show lower levels of fasting insulin and improved glucose metabolism.

Exactly what causes this correlation is unknown.

However, rising rates of diabetes are among the biggest public health concerns across the globe.

Not only does diabetes itself contribute to over 1.5 million deaths annually around the world, but the health and economic impacts of high blood sugar are immense.

Diabetes is a prime contributor to heart disease, stroke, obesity, and other major metabolic ailments.

It’s amazing how much just one plant covers and hard to believe it’s been illegal for so long.

6. Medicare costs on many prescription drugs have declined in medical cannabis states

Medical cannabis consumers are swapping their prescription drugs in exchange for the natural herbal remedy.

On average, daily doses of antidepressants per physician per year fell by 265. For pain, prescriptions fell by 1,826 daily doses per doctor per year.

Compared to the overwhelming rate these medications are prescribed, these numbers may not seem that significant.

However, reduced prescriptions per doctor equate to some major health care savings in the long haul.

According to the study, medical cannabis laws were estimated to have saved taxpayers over $165.2 million as patients forwent their pharmaceutical medications and picked up the plant instead.

What other ways is cannabis helping us live happier, healthier lives?

The phrase “vape together, stay together” might have some weight after all.

A 2014 study published in the journal Psychology of Addictive Behaviors followed 634 couples during their first nine years of marriage.

The study’s researchers were hoping to test whether or not cannabis consumption had any impact on rates of intimate partner violence during marriage.

Overall, the research found that couples who consumed cannabis together during the first year of marriage were less likely to experience domestic violence during the first nine years of wedlock.

However, the research also found that if women alone smoked cannabis, they were more likely to be victims of domestic violence.

Yet, these women were already more likely to report experiencing intimate partner violence prior to marriage.

Will cannabis put a stop to domestic violence? No.

But given that the herb can act as a replacement for other violence-inducing substances, cannabis reform is certainly worth considering.

So, Why Not Take Your Cannabis Knowledge to the Next Level?

If you agree that cannabis is such a valuable medicine for our health, what’s the next step?

Where to find credible answers to our biggest cannabis questions?

You can find a lot of reliable answers on the brand-new Green Flower platform – 100s of videos with top cannabis physicians, scientists, practitioners, cultivators, and so much more – now streaming free. 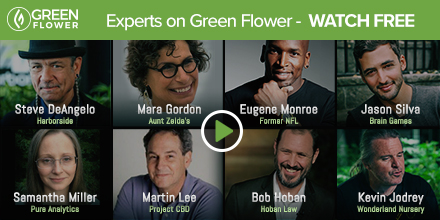