The U.S. marijuana industry has quickly become a major job generator in state economies. According to a report released by MJ Biz Daily, cannabis-related companies are now employing an estimated 100,000 to 150,000 workers.

It’s an impressive feat for an industry that has, for the most part, only been operating legitimately since 2009, and it underscores the rapid growth in the both the number and size of companies in the sector.

The employment figures include both part-time and full-time positions. They were calculated using the estimated number of marijuana businesses in the country and the average number of workers companies in each segment employ, gathered through Marijuana Business Daily’s annual survey of cannabis industry professionals. 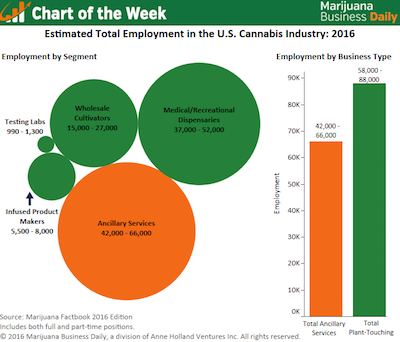 To put these numbers in perspective, the marijuana industry now employs approximately the same number of people as there are flight attendants in the country – or web developers, database administrators and librarians.

The plant-touching side of the industry is particularly large, employing 58,000-88,000 workers. But ancillary companies that don’t handle the plant, such as cultivation lighting businesses, vaporizer manufacturers and professional services firms, also employ tens of thousands of workers.

The potential for further job growth is high, as the industry is still very much in its infancy. In 2016 alone, ballot measures in half-a-dozen states are in place to legalize either medical or recreational marijuana this fall, with several more states still fighting to get on this year’s ballot.

If even a handful of these measures pass, industry job growth will soar.