Many patients are aware the Federal Government claim Cannabis has medicinal benefits as exhibited in their patents on various constituents of Cannabis. Many more do not know that law enforcement in the State of Hawaii have also scheduled Cannabis as “Schedule 1”. Schedule 1 drugs must have “the highest degree of danger” of all drugs. So if you’re wondering why we can’t get the mainstream medical community involved, now you know.

Some Doctors are working hard to try and change this as compassion for their patients would dictate. Dr. Clifton Otto maintains a website to help patients, legislators and the general public understand this dicotomy in our health care system.
“Re-schedule Cannabis at the state level and notify DOJ that Marijuana has accepted medical use in Hawaii, and either Marijuana needs to be removed from federal Schedule I, or Hawaii needs to be exempted from enforcement of federal Schedule I as it applies to Marijuana.” -Cannabis Healthcare Hawaii On Dr. Otto’s Cannabis Scheduling page you can learn the facts and details regarding Cannabis scheduling in Hawaii.

“In order to better inform our decision regarding the appropriate state schedule for cannabis, Senator Will Espero and myself have requested input from the Department of Public Safety in addressing this issue.” – Hawaii State Senator Russell Ruderman

Update – Dec. 2016: Public Safety is not cooperating with this process. They feel that they have to follow federal scheduling instead of state law which permits medical use. Legally, they can by law re-schedule Cannabis at the state level. According to patient advocates, Director Espinda is refusing to re-evaluate for unknown reasons.

Update – Feb. 2017 – SB 120 would have required “the Department of Public Safety to reassess the classification of marijuana as a Schedule I drug under state law and to report its findings to the Legislature” but was deferred in the Senate committee on Public Safety, Intergovernmental, and Military Affairs chaired by Clarence K. Nishihara. The bill would have helped patients access Doctors and medicine. The House committee on Health chaired by Representative Della Au Belatti  didn’t schedule HB 170 for a hearing. Both House Bill 170 and Senate Bill 120 would have helped patients access medicine. There was very little input from the public. Two pieces of testimony from the Hawaii Police Department and the Department of Public Safety seemed to derail the bill. Read Dr. Clifton Otto’s page on rescheduling for the solutions and consequences for the medical community and patients. 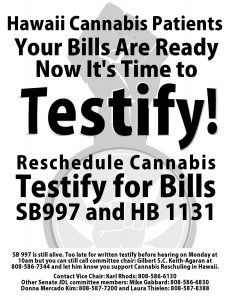 SB 997 – The committee(s) on JDL will hold a public decision making on 02-27-17 10:00AM in conference room 016.
Contact the chair and members of this committee to let them know you Support Cannabis Rescheduling.

HB 1131 – Referred to HLT and JUD. It was HLT the House committee on Health (HLT) that failed to schedule a simlarly helpful, HB 170 bill for a hearing.

We are writing to you because of a growing interest within our state Legislature to address the state scheduling of marijuana in Hawaii.

We know that the State of Hawaii accepted the medical use of marijuana in 2000, when it exercised its right to accept the medical use of controlled substances, and created Hawaii’s Medical Use of Marijuana Program [1]. We also know that Hawaii’s Uniform Controlled Substances Act (UCSA) requires that substances in state Schedule I have the “highest degree of danger” [2].

However, we do not have any other substances in state Schedule I that have medical use in Hawaii, and we do not give our patients substances that have the highest degree of danger. Clearly, something needs to be done to correct the current conflict between the medical use and state scheduling of marijuana in Hawaii, especially as Hawaii dispensaries prepare to sell this medicine to our patients.

It should be noted that there is nothing preventing the Legislature from making controlled substance scheduling changes that follow state law, even when such changes do not match current federal regulation. In fact, our UCSA specifically authorizes your department to make scheduling recommendations independent of federal scheduling when necessary under state law [4]. In addition, Oregon’s Board of Pharmacy, which has scheduling authority in that state, moved marijuana into their state Schedule II in 2010, without any adverse effect upon their state’s ability to regulate this substance and without any federal interference [5].
Therefore, in accordance with HRS 329-11, and in order to better inform our decision regarding the appropriate state schedule for marijuana, please provide us with a scheduling recommendation for marijuana that recognizes its medical use in Hawaii.

Thank you for your attention to this pressing matter. We look forward to your timely response.