Last week, thousands of cannabis industry professionals came to Las Vegas for the 5th Annual Marijuana Business Conference. It is by far the longest running, biggest and most respected cannabis trade show event – featuring the industry’s leading entrepreneurs, advocates and investors – and is growing each year at an astounding rate.

I had never attended this conference before. While I genuinely enjoy and thrive in networking situations, this one was big enough even I had a hard time keeping up. However, although it may have been slightly overwhelming for some, the attendance and enthusiasm that was apparent in the atmosphere at the conference was absolutely inspiring. There were 10,881 attendees this year, almost double what the conference saw last year in 2015, where there was 5,561 attendees. The conference sold out certain items starting on Tuesday (11/15), but most rolled into Wednesday.

“The demand for attendance exceeded our expectations. We were able to accommodate as many people as the rooms would fit,” said Marijuana Business Daily. I think we exceeded the expectations of many…who knew this would almost double in size in a year’s time?

The conference included over 300 exhibitors ranging anywhere from light and nutrient companies to dispensary software to security companies and beyond. A particularly interesting display was put together by MJ Freeway and took up the entire stage in one of the exhibit halls, and featured a “dispensary of the future” type of experience. Fascinating!

Another dispensary exhibitor with some futuristic technology was C4Ever Systems. They had a kiosk type of machine where cannabis orders can be placed (1 gram, 5 grams, etc) and the consumer simply accepts the order and pays. The idea is to streamlines the transaction process and allows staff to focus on consumer needs and not counting cash and making change. It’s kind of like a vending machine for weed! 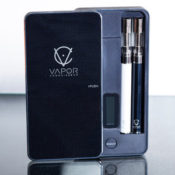 I was given a few products in the expo halls as well, including a CBD topical patch from Pure Ratios, a vape pen from Vaporous, and a couple of blended cannabis oil/essential oil vape pens from Evoxe Laboratories. But, certainly one of my favorite pieces of new technology that I saw at the conference was vape pen kit with 2 small vape pens (maybe 4 inches each) that had refillable cartridges and were carried around in a small case that doubled as a battery charger. I got the chance to try it out at the Bhang Bash on Tuesday night. It was from Vapor Connoisseur, called the Genie vape kit, and was definitely different than any vape product I have ever seen 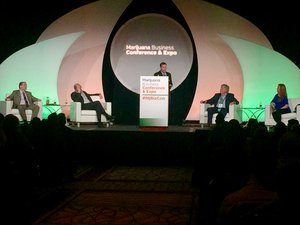 Policy panel about election results and how they’ll affect the industry.

The programming was top notch at the conference as well. Speakers such as celebrities such as Penn Jillette, policy gurus such as Ethan Nadelman, and business experts such as Juliet Funt were amongst the many highly acclaimed list of speakers in the programming. I particularly enjoyed the “Win, Lose or Draw: 2016 Election Postgame” panel and hearing about what the activists and policy experts had to say about where we are at as an industry. But, I am saving that one for another article!

Seeing “the entire marijuana business ecosystem” (as they market it) all under under one roof was amazing, and I commend the independent journalists at Marijuana Business Daily for curating it. Between the resounding YES on election results regarding cannabis and this event doubling its number of attendees in 1 year’s time, the tone for this industry is clear: we are driven, we are growing, and we are here to stay.