I know, the whole “You ever [insert experience here] while high? It’s sooooo much better” is such a tired trope that Half Baked mocked it nearly 20 years ago. But upon hearing that the Seattle Symphony orchestra was going to screen The Lord of the Rings: The Fellowship of the Ring while they played the entire score with a full chorus, I couldn’t resist the opportunity to experience one of the biggest fantasy epics in history, in surround sound, while rockin’ a head and body high.

So, armed with a couple of 15 mg peanut butter bar wedges, I settled in for the ride. Below is a timeline summary of my experience aligned with the film’s run time (non-extended edition). 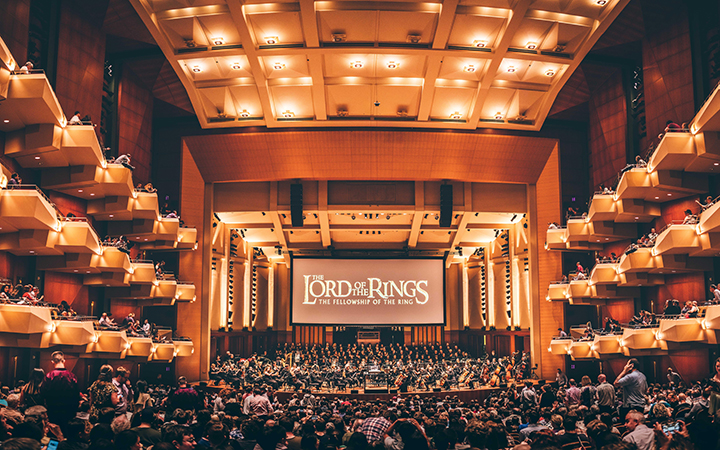 The Seattle Symphony setup (photo credit: Will Good from Just2GuysCreative.com)

T-minus 30 minutes: I finish dinner and pop my edible so that it will kick in right around when the movie starts.

T-minus 15 minutes: We Uber to Benaroya Hall and find our seats. The orchestra is plinking out warm up notes and tuning their instruments. A congregation of singers arrives, separated by gender and age (ladies to the left, gentlemen to the right, boys in front). I’m pretty hyped.

0:00:20 – 0:01:03: My homegirl Cate Blanchett begins her opening voiceover. The chorus’ soft voices meld with the strings playing the film’s iconic first notes, sending a chill down my spine. The pricey tickets already feel worth it.

0:02:20 – 0:04:20: The historic battle for the freedom of Middle-earth unfolds. French horns boom. The chorus chants. Sauron sends dudes flying across the screen until Isildur gives him a four-digit-ectomy. Angry because the ring really tied his outfit together, Sauron rage-quits and Middle-earth is safe…or is it? (It’s not. We’ve all seen this movie.)

“Great, now I have to modify all my gloves.” (Photo credit: New Line Cinema)

0:04:35: You had one job, Isildur. But noooo, he decides to keep the ring instead. Scumbag Isildur.

0:07:16: First hobbit scene. It’s Flute Lady’s time to shine and she nails it. The orchestra convinces me that Hobbiton is the happiest, most chill place on Middle-earth. In the immortal words of Liz Lemon, “I want to go to there.”

0:11:35: Right when Gandalf knocks on Bilbo’s green hobbit door, I realize the edible has kicked in. My face tingles and my body melts into my seat, figuratively gluing me in place. Sweet.

0:13:30: Gandalf and Bilbo cryptically discuss the 111-year old hobbit’s birthday plans while a rare silence settles across the orchestra. I realize there is so much music in this movie that the absence of it during a live performance is jarring.

0:15:13: “Old Toby. The finest weed in the Southfarthing.” The audience laughs and it dawns on me that there’s a reason why Hobbiton is the happiest place on earth, and why hobbits always seem to have the munchies. #legalizeit

Bilbo blows a smoke ring. Gandalf one-ups him by blowing a friggin’ three-sail smoke ship that sails through it. Showoff.

0:26:42 – 0:27:19: Horns blare as Gollum undergoes “enhanced interrogation tactics” in Guantanamordor Bay. “Shire! Bagginsssss!” The Nazgul ride out while I feel the chorus’ sing-chants reverberate through my body.

0:30:50 – 0:36:26: Surprise! You just inherited a cursed ring. Get thee to the Inn of the Prancing Pony and await further instructions. And take Peeping Sam with you while Gandalf convenes with Saruman, the head of his order who “is both wise and powerful.” I think of South Park’s “Garden of Lies” scene and mutter to myself, “He’s gonna betray you!”

“Be sure to drink your…Ovaltine?” (Photo credit: New Line Cinema)

0:39:20 – 0:43:05: Saruman (R.I.P. Christopher Lee!) chides Gandalf for not knowing the One True Ring was in the Shire this whole time, saying, “Your love of the halflings’ leaf has clearly slowed your mind.” Yeah, well, you know that’s just, like, uh, your opinion, man.” He then pulls a Kevin Durant and is all, “Look, the Golden State Warriors Mordor has all the talent and power so I’d be a fool not to sign with them,” while the Oklahoma City Thunder Gandalf replies, “Seriously, dude?” The orchestra’s ominous undertones build to a crescendo. Battle of the Beards ensues.

0:44:35: Frodo and Sam literally run into Merry and Pippin. The quartet tumbles down a ravine. Pip narrowly avoids getting a face full of poop, which sparks laughter from the audience and a loud, accidental fart from the balcony neighbor sitting to my right. I manage to keep it together until my husband leans in and whispers, “Did that guy just laugh-toot?” I spend the next several minutes shaking with silent laughter while hot tears stream down my face. As Louis C.K. so beautifully put it, “You don’t have to be smart to laugh at farts, but you’d have to be stupid not to.”

1:01:15 – 1:04:55: With “Strider” in tow, the dumb-ass hobbits light a fire and thereby attract the attention of the Nazgul. Strings screech, horns burp, people chant. I watch, mouth agape. Frodo gets the world’s nastiest staph infection from a Morgul blade and Strider’s all, “We need to get his ass to Rivendell so we can treat this with some universal healthcare cuz I don’t have the schmeckles to pay for this.”

1:04:56 – 1:07:26: The booming French horns indicate we’re back in Isengard watching the orcs level up. A butterfly appears and the score’s aggressive 5/4 time transitions to a heavenly choir sound. One of the boys stands up to solo while Gandalf whispers, “Get me the eff out of here” to the butterfly, and his flawless voice fills the symphony hall.

The beautiful singing is promptly cut short by Saruman watching the ground live-birth a bunch of fully-grown Uruk-hai covered in slime. Gross. Way to kill the moment.

MRW I learn how Uruk-hais are made. (Photo credit: New Line Cinema)

1:08:30 – 1:13:42: Arwen to the rescue! She uses her Mario Kart golden mushroom boost to speed her and Frodo to Rivendell after dispatching the Nazgul with a literal rendition of “Wild Horses” (I guess they could drag you away, after all).

1:24:54 – 1:26:32: Arwen and Strider share a moment on a bridge, going over their Facebook Memories (“Here’s us at Bonnaroo! Here’s one of us zip-lining!”). While they reminisce, a singer, standing out in a pretty pink gown among the chorus and musicians’ conservative black attire, performs the “Theme for Aragorn and Arwen,” her voice ebbing and flowing like a gorgeous, ethereal dream. Arwen gives Strider the elvish equivalent to a promise ring and he’s like, “Uhhhh, aren’t you immortal or something? This is Middle-earth, I’m going to live to 45 tops.”

1:28:13: Legolas outs Strider as Aragorn, son of Arathorn, and Boromir’s all “Oh crap, I’ve been throwing shade at my friggin’ king this whole time?!”

That face when you get caught talking shit about your boss. (Photo credit: New Line Cinema)

1:30:00: Boromir utters the line, “One does not simply walk into Mordor” and the group to my right (which possibly includes Laugh-Tooter) starts cracking up. I’m confused until I remember the Internet meme. Methinks my neighbors may be stoned, too.

1:33:30: We make it to intermission. The crowd applauds the orchestra and the chorus. My husband and I make our own daunting journey to the bathroom, our legs as heavy as the One Ring. The edible is still going strong so I decide not to re-up with another half-wedge.

1:34:39: One of the French horn performers cranes his neck to watch Bilbo’s face turn evil as he reaches for the ring. It’s the best face-change jump scare since Large Marge, and the audience gasps in jittery delight.

1:45:43 – 1:47:45: Gimli’s all “Get hyped, dudes, because my boy Balin throws the most epic house parties in Middle-earth.” Unfortunately, he forgot to text his cousin ahead of time and the Fellowship realizes they’re about seven years too late to the shindig. Also, everyone’s dead, which is too bad because the gang brought a huge plate of calamari that’s totally going to go to waste because seafood doesn’t save well.

1:49:26: Frodo goes full Rockwell and Gandalf’s like “Oh yeah, that Gollum is a stage-5 clinger. Just ignore him for now, as he won’t actually get any screen time until part 2.”

1:52:50 – 2:01:47: Gimli discovers his cousin partied a little too hard, Pippin does Idiotic Thing #578 and summons a bunch of orcs towing a cave troll, and an epic mini battle ensues. Once again, the orchestra falls silent for much of the fight, letting the intense action speak for itself until the cave troll goes on a rampage and stabs Frodo. (Don’t worry, mithril armor spares our hobbit hero.)

2:01:48: Cymbals crash and rousing horns blare “The Bridge of Khazad Dum” as the Fellowship tries to nope their way out of Moria.

2:07:45: Unfortunately, a Balrog appears and is all “Can I come, too?” and Gandalf pulls a mean kid from Forrest Gump, sneering, “This seat’s taken!” So rude.

2:13:17 – 2:17:52: The crew sans Gandalf makes it to Lothlórien and meets Lady Galadriel. Pink Gown Singer performs “Lament for Gandalf” while the female chorus members sing mournfully in the background. It’s a stunning performance.

2:18:00 – 2:23:20: The chorus is really nailing the dreamy feel of the elf forest, underscoring Galadriel’s midnight stroll (is she on Ambien?) with fantastical tones. Frodo tries to give her the ring and she’s like “Thanks, but white gold goes better with my complexion. By the way, someone in your crew is gonna try and jack yo jewelry.”

You might want to cool it with the makeup contouring, Gal. (Photo credit: New Line Cinema)

2:25:00 – 2:35:10: The Fellowship leaves Lothlórien with gifts in tow (Boromir: “Awww, I got socks”), but unbeknownst to them the Uruk-hai are hot on their trail. Boromir gets grabby, Frodo bails, and the rest of the crew prepares to take down an entire orc army. Oh man, this last scene is SO FREAKING GOOD.

2:35:11 – 2:37:10: The orchestra members who aren’t performing sneak peeks at the screen to watch the epic mini battle. I’m hugging my knees to my chest as Aragorn, Gimli, and Legolas kick ass and chew bubble gum (and they’re all out of bubble gum). The music soars and I feel like I’m right next to Frodo crouching behind a tree and peeing myself in awed terror.

2:37:38 – 2:44:22: Boromir redeems himself and goes out like a boss, taking down about 15-20 orcs while getting shot by arrows the size of tree branches. Aragorn dispatches the Uruk-hai with the Snooki hair bump and we all watch Sean Bean die onscreen for the 20th time.

2:44:24 – 2:58:20: Sam and Frodo continue on towards Mount Doom while Legolas and Gimli join Aragorn in hunting down the orcs who hobbitnapped Merry and Pip (after they stop at a dispensary, since we know our man Viggo partakes in cannabis) . Pink Gown sings Enya’s “May It Be.” She’s followed by another solo from the boy soprano as the orchestra plays through the entire end credit sequence, and I’m moved to tears by their impeccable performances.

The crowd gives a rousing standing ovation to the soloists, the orchestra, the chorus, Peter Jackson, everyone in New Zealand, Tolkien’s ghost, and George R.R. Martin for some reason.

My husband and I grab an Uber home and vape some Blueberry Cheesecake, alternately awing over how amazing the screening was and laughing once again at Laugh-Tooter. We brainstorm other epic films we’d love to see the Seattle Symphony orchestra perform to before calling it a night, our dreams filled with diminutive heroes, iconic music, and surprise flatulence.