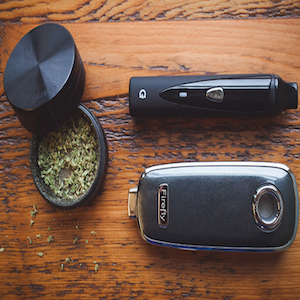 This is is where herb is put in direct contact with a hot coil which causes it to combust. This is really no different to a hot flame. This will produce smoke instead of vapor and will provide no additional health benefits over smoking a regular joint. Despite this fact, there are a number of vaporizer pens on the market that use this method and they should be avoided.

Conduction by definition means the transfer of heat through a substance when there is a difference of temperature. In the case of a vaporizer pen, This is where weed is placed on a glass screen above the coil or heating element and heated to the optimum temperature of 350°F – 450°F. The glass screen is there to ensure that the herb doesn’t get too hot and combust. Usually it takes about 5 – 25 seconds for the glass screen to heat up to the right temperature before vapor is produced. Most entry to mid range pens tend to use conduction. The main downside to this however is that the herb is always being heated which can be wasteful. The herb often comes in direct contact with the sides of the vaporizer and heats quicker than the herb in the middle. This means that frequent stirring is required in order for your herb to be heated evenly. The quality of vapor produced depends a lot on how you grind and pack the herb. A good example of a quality conduction vaporizer pen is the Pax 2.

This is where the herb is heated by drawing hot air up through the vaporizer pen. The herb is often suspended on a mesh screen above the coil to avoid direct heat. The coil heats the air and causes the herbs to release vapor. Because the herb is heated by hot air no herb is wasted due to burning, it also means that more flavor and THC is released, creating one of the purest highs available. It usually takes about 30 seconds for a convection vaporizer to fully heat up and for best results it is recommended to slowly inhale through the vaporizer pen. A good example of a portable convection vaporizer is the Firefly 2.