Fibromyalgia is a condition in which chronic widespread pain is the primary complaint. It is most often diagnosed in women and has a high prevalence in individuals with Post-Traumatic Stress Disorder. For many patients, the Fibromyalgia diagnosis may have come after decades of trial and error of various therapies, and stagnant conversations with a doctor who may have believed that “it’s all in your head”. However, as more and more physicians and patients affirm, Fibromyalgia is very much a real condition, and one that is quite complex. In addition to persistent pain, which varies in intensity from day to day, Fibromyalgia patients often experience a slew of accompanying symptoms such as: morning stiffness, muscle cramping, fatigue, migraines, headaches, non-restorative sleep, cognitive dysfunction, depression, and anxiety, to name a few.

My friend Erica struggled with pain and other debilitating symptoms for years and eventually was diagnosed with Fibromyalgia.  Recently, she shared her story with me.

“I’ve been using cannabis to treat my pain for years, long before I even knew I had Fibromyalgia. I’m glad I found the plant early in life. I had a lot of trauma and it was, in retrospect, a much safer route than taking pills.  I first noticed trigger point pain and joint pain around 2007 after the birth of my daughter.  It was also that year that I first noticed hearing the word “Fibromyalgia” and, after hearing the symptoms, knew exactly that’s what was wrong with me. I went to several doctors and X rays showed mild arthritis but I also had other symptoms to begin like food allergies. First it was gluten, then dairy, now nightshades.  Sometimes eating the smallest amount will cause flares to happen, anxiety and severe insomnia. I experienced a few car accidents in my teens and early 20s, none fatal but still scary and created lots of anxiety. Then I experienced what therapists would call ‘a lot of trauma’ between 2006-2009.”

Erica went on to explain that, “doctors did every test in the book and basically told me I was crazy and put me into the ‘pill addict’ category. I worked in pharmacy at the time and was already planning a career change. I knew I wasn’t a pill addict. They prescribed me antidepressants. I knew I had depression, which stemmed from underlying issues like severe insomnia, anxiety, pain and IBS from unknown new food allergies. I honestly felt defeated. I couldn’t find a doctor who could figure it out, or believe me.”

Thankfully, this past year Erica found a doctor who believed in her and agreed that cannabis is a great option and she finally feels better.

Erica is an Oregon resident and said that, “before cannabis was legal here, I would get any kind I could find. It wasn’t until recent years that I’ve delved deeper into learning about different strains and CBD. I use CBD edibles sometimes during the day to help with anxiety and pain.  I also use Indica strains at night to help battle the insomnia and during the day sometimes to treat the loss of appetite side effect of one of my meds. It happens rarely, because I love food, but when you’re flaring because of something you ate and you can’t figure out what, food becomes scary.  Cannabis helps with that in a big way for me.  I’d say cannabis is able to alleviate 80% of my symptoms and I take low dose pharmaceuticals now to treat the rest. Some people use only pills, some only cannabis. I think cannabis is definitely the safest especially now that you really don’t have to smoke it. ”

Because many traditional pharmacological options are often ineffective and result in an unbearable amount of side-effects, it is important to consider alternative treatment options such as cannabis.   Check out this article by GrowWise Health to learn more about the specific ways that medical cannabis can help manage pain associated with Fibromyalgia: 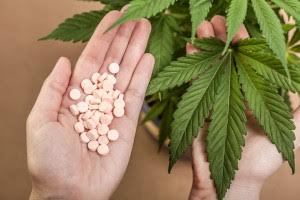