I had the pleasure of meeting Ralph, or Dad Ralph or Ralph Red Hat to some, a few weeks ago at a party that Serra Cannabis had in Portland. In discussing all things cannabis at the event, I learned that Ralph had visited all of Portland’s 181 dispensaries, or “pot shops” as Ralph affectionately calls them, over the summer.

“I got tired of walking to the downtown shops and heard there were 125 in the whole city. I checked the Oregon Government website and found that there were actually 181 and knew I had to see them all,” Ralph explained to me.

Ralph started his search through Leafly and began his journey with the Ganjacon event in Portland in June of 2016.

Ralph is not what I would say fits the typical “stoner” image for most…he is 62 years old and over 6 feet tall. He and his wife, Flo, have been married for 29 years and they live in a very residential area just outside of Portland. They raised a family together and had full careers and now enjoy retired life alongside their sweet cat, Princess.

I believe that people like Ralph will play a huge role in shifting the paradigm about cannabis in the big picture, which will ultimately help end cannabis prohibition federally. Ralph agrees that it’s all about changing society’s perception and being with people who use responsibly. He also feels that a big part of making change in the cannabis sector will be proving to more conservative voters that there is profit with legalizing and regulating this plant, as money changes social morays. However, Ralph believes the biggest topic that will change people’s minds from a “no” vote to a “yes” vote is finding and showcasing evidence of cannabis as medicine. I would agree.

Meet Ralph! Here he is on one of his many “pot shop” walks this past summer. Ralph lost 20 pounds he did so much walking!

“The medical argument is what will work,” Ralph says. “When the conversation begins about how this plant has medical properties for your grandmother, or your granddaughter for that matter, then we will see some minds change for good.”

Ralph’s wife Flo had a long career with the U.S. Military, and for a few years she and Ralph lived in Germany when she was stationed there. Living overseas really gave the couple a different perspective on drug laws in other countries, and they found this truly made an impression on both of them when they returned to the U.S.

“People’s fears regarding cannabis are unfounded,” says Flo, “and we are wasting so much tax money on law enforcement resources and incarcerating people because of this plant.”

Ralph either took public transportation or walked to ALL of his 181 dispensary stops over the summer. He lost 20 pounds and said he feels great. When asked what is his favorite store was, he said, “The one in your neighborhood!” However, he did mention that Serra Cannabis, Oregon’s Finest, and Shango ranked up on the top of his charts for visitors in Portland. He also said that the best event he went to was the The Summer Fair.

Ralph’s next plan is to test 48 strains with a vaporizer, all that were given to him free at one of the legal weed events here, or that were discounted at the dispensaries he visited.

Ralph and I also talked about what his thoughts were on compliance and the roll out of the legalization laws here in Oregon.

“I have heard there have definitely heard some people complain, but I am just so glad that I can go into a pot shop and buy pot as I please after waiting 47 years to be able to do so.”   Indeed.

Look for more on the Blog coming soon from Ralph and his strain reviews and other adventures in Potlandia. 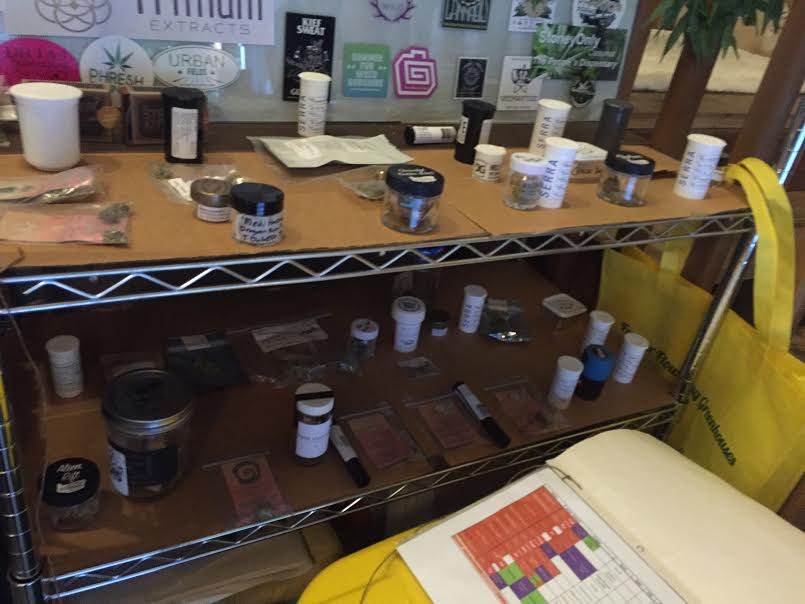 Ralph’s next venture is to test all 48 of these strain samples that he has neatly organized on shelves in his garage right alongside his laminated Leafly flip chart.