Aside from a brief mention in a Drake song, you probably won’t hear any obvious cannabis lyrics at this Sunday’s Grammy Awards ceremony. Songs like Afroman’s “Because I Got High” and Willie Nelson’s “Roll Me Up and Smoke Me When I Die” are now beloved classics, but they tend not to garner the hardware come awards season.

On a day that the nation’s attention is turned to music, though, it’s worth remembering that the relationship between cannabis and popular song goes back–way back. To the 1930s.

“It was well-liked because it did something to steady their time feel; it was very useful for playing jazz.”

More than 80 years ago, when American music tastes were morphing into what we call the Swing Era, cannabis references began popping up regularly in popular music.

Pioneering jazz historian and multiple Grammy Award winner Dan Morgenstern said that as America was coming out of alcohol’s Prohibition, marijuana caught on with many people as an intoxicant. And it wasn’t just in the big U.S. cities.

Morgenstern pointed to a story he heard from famed band leader Woody Herman, who told him about a big dance concert “somewhere in the Midwest” that Herman played in the 1920s. “And he said there was a cloud of marijuana smoke there at that outdoor concert,” he remembered.

Cannabis was especially popular with musicians who were learning how to handle swing’s more intricate time and tonal demands.

“The thing about whatever we want to call it, cannabis, pot, marijuana, ‘gage’, ‘tea’, whatever, is that it was it was very prevalent,” Morgenstern told Leafly in a recent interview. “It was well known in the ‘20s but became really associated with the music with the Swing Era.”

“As we all know by now it does affect your time perception, and that’s what made it so well-liked among musicians,” he continued, “because it apparently did something to steady their time feel and make it very useful for playing jazz.”

Why Does Cannabis Slow Down Our Time Perception?

Many major recording artists celebrated cannabis in their records in the 1930s. Swing Era hipsters and followers of swing music certainly knew about marijuana – “and probably a goodly number of them indulged,” said Morgenstern. But much of that openness, he said, ended with “the arrival of Mr. Harry Anslinger,” the Depression-era head of the Federal Bureau of Narcotics (the predecessor to the DEA)  and the outlawing of cannabis in the late 1930s.

Here are some famous examples of how cannabis made an impact on American music in the 1930s:

If he trades you dimes for nickels,
and calls watermelons pickles,
then you know you’re talkin to that reefer man. 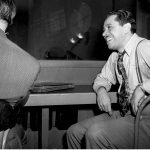 Scat singer extraordinaire and Cotton Club legend, Cab Calloway and his orchestra were famous for their tight playing, their manic energy, and Cab’s unique dance steps. Their 1931 hit “Minnie the Moocher,” another drug-themed song (with its “Hi-Dee Hi-Dee Hi-Dee-Ho” chorus), was so popular it was it featured in a Betty Boop cartoon – in which Calloway loaned not only his singing voice but his rotoscoped dancing to one of the scary characters in the animation.

“From what I’ve learned from interviews with his sidemen I don’t think he himself was particularly into smoking,” said Morgenstern of Calloway. “But with his jive singing ‘Reefer Man’ was kind of an exaggeration of his persona.”

In the hipster (or “hepster”) parlance of the time, a “viper” was a marijuana smoker. The term supposedly got its name from the hissing sound made by someone taking a quick toke off a joint.

Best known for his standard, “Ain’t Misbehaving,” Thomas “Fats” Waller had a larger-than-life persona. He became a national headliner thanks in part to his comedic tunes like “Your Feet’s Too Big.”

While Waller was a “legendary drinker,” Morgenstern said he was certainly part of the whole viper culture. He also had hits with some other marijuana-themed songs, like his cover of Stuff Smith’s “You’re a Viper (The Reefer Song).”

Cannabis aside, Waller was a virtuoso pianist and one of the fathers of stride piano – where the left hand acts as the rhythm section while the right hand plays the melody. His classic “Handful of  Keys” is a prime example.

One of the best-known and most influential names in jazz, Louis Armstrong was also a life-long cannabis enthusiast.

He was one of the first American celebrities to be arrested on marijuana charges as well, when in 1930 he and a fellow musician were caught by detectives while “smoking the gage” outside a Los Angeles night club. Armstrong spent nine days in prison and was given a suspended sentence but remained unrepentant about his love for the weed:

“That’s one reason why we appreciated pot, as y’all calls it now,” he later told his biographers. “The warmth it always brought forth from the other person – especially the ones that lit up a good stick of that `shuzzit’ or gage, nice names.” 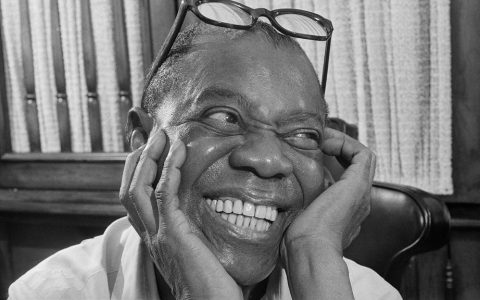 Louis Armstrong and Cannabis: Celebrating the Jazz Legend’s Lifelong Love of “the Gage”

In another biography, author Terry Teachout quotes an Armstrong band member who said “Satchmo” told everyone in the group to smoke a joint before they recorded “Laughin’ Louis.”

And you can believe that the band was kind of elevated as they played. Armstrong himself sounds like he’s having a ball; and cracks up his band members by making some silly “blats” on his horn.

“It makes sense for him to say that everyone should get loaded, to do a comedy record,” noted Morgenstern. “And then of course he winds up doing that beautiful a cappella solo, which takes you into another realm.”

Now come on Mama, Mama, Mam-oh, and quit that holding out on me. 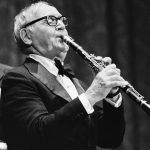 Not many people might associate cannabis with Benny Goodman. The clarinetist and big band leader had huge hits in the late 1930s and 1940s with songs like Sing Sing Sing, Let’s Dance, and others. Goodman and his orchestra also brought mainstream legitimacy to swing music with their landmark Carnegie Hall concert in 1938; an event also remembered as one of the first public concerts to feature a racially integrated group.

But “Texas Tea Party” was before all that, and features trombonist and future big-band leader Jack Teagarden on vocals. The song’s title is apparently a play on both the slang for cannabis and Teagarden’s name.

It’s not known if Goodman himself smoked pot “but Benny was never a prude,” observed Morgenstern.

A vocal quartet usually backed by bass and acoustic guitar and best known for their sentimental and international hits like “If I Didn’t Care” and “I Don’t Want to Set the World on Fire,” it might be a surprise to hear The Ink Spots singing about getting high (although they do say in the song that the “cat” in question has been drinking).

But as Morgenstern said, “You can tell that the Spots were not just into the romantic. They were pretty hip; they did nice jump numbers.”

The Ink Spots are credited as one of the groups that helped to bring about Doo Wop, and were inducted into the Rock and Roll Hall of Fame in the 1980s.

For his part, Morgenstern believes the current crop of marijuana songs are direct descendants of the tradition that began in the early jazz years.

“The whole linkage is there,” he added. “And you know that Willie Nelson is a pretty good jazz player on his own, right?”