On Saturday I was able to attend a Lift The Ban rally and fundraiser put on by the Oregon Cannabis Business Council (OCBC) with all proceeds going to the Vote Yes on 24-404 and 24-405 Campaign’s political action committee (PAC).  The event was held at Gildamesh Brewing in Salem, Oregon, just minutes away from our state capital.

While many people go under the assumption that all of Oregon’s counties will be able to continue to have legal cannabis businesses and sales, this simply is not the case as evidenced by the number of ballots that will have these 2 measures on them.  Marion county is one of those counties.

Speakers were there to discuss their vision for expanding what is working in the city of Salem to the rest of Marion county and encourage people to support lifting the ban on cannabis businesses in Marion County to keep jobs, revenue and school funding in our county.

Genevieve Sheridan, Chairperson and Treasurer of the campaign’s PAC, and Chairperson of OCBC Willamette Valley said,

“The medical measure, 24-404, is devastating to the patient community who are already reeling from changes brought about by 91. Banning medical access this way sets a bad example for other counties considering methods to bring about prohibition. The capital’s county should stop threatening the medical community.”

“The cannabis industry is working very well in the City of Salem. Allowing cannabis businesses outside of city limits will bring hundreds of millions of dollars in revenue to Marion county. Businesses are already moving just over the county line and taking jobs with them. 20% of the estimated $43million in recreational cannabis taxes go to cities and counties that opt-in and allow OLCC licensed cannabis businesses. This ban in particular is so important, because we are sitting on the pulse of the industry’s legitimacy.”

When Measure 91 was drafted, this was not the intent.  LeLand Berger, one of the event’s speakers, clarified that the intent of Measure 91 was to allow for the people to vote to opt out, not for the county’s commissioners to opt out and then have people vote to have to stay opted in.  But, that is exactly what is happening.  He also used the (very clever) term “cannabigotry”.

“The cannabigotry is neverending, even in a legalized market.“

“The cannabigotry is neverending, even in a legalized market.“ Berger said while he was speaking for the crowd, “the people are ahead of the Marion County Commissioners and we need citizen voices to be heard.”

Oregon State Representative Ken Helm, District 34 also spoke at the event.  He spoke in support of both 24-404 and 24-405 and explained,

“The train for the cannabis industry isn’t leaving, it has left.  If they’re not on it, they’re going to be left behind.  It’s pure and simple.  As a state, we want to be in a position to market our products nationally first and best so they we take advantage on could potentially be an interstate market in cannabis in the U.S.  What we need to do now is make sure our industry home is strong, cooperative, and that we treat each other right.”

He went on to make an analogy of how we were sitting in a craft brewery at that moment, and what the craft brewery had to endure when they came to rise. 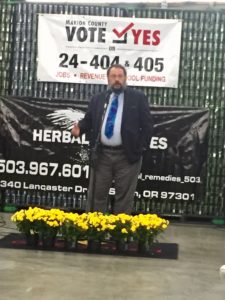 Other speakers included Jenny Dresler, Director of State Policy for Oregon Farm Bureau and Brent DeHart, Past President Salem Area Chamber of Commerce while OCBC president Don Morse moderated the program.  Don made mention of several important things that had to do with the measures and also drew to everyone attention something I thought of immediately upon arrival.

As we sat in this brewery with pallets of canned beer stacked on top of each other and kegs lining the room, I couldn’t help think about what things might be like in Oregon in a few years, and if we would be able to attend events such as this one where there are cannabis plants stacked around in a warehouse instead of beer.

It will be much longer if counties like Marion do in fact choose to opt out and refuse to lift the ban.  Sheridan was just recently quoted in an AP article about just this.  My good friend and long time Oregon grower James Knox was quoted in this article as well.  Aside from growing, Knox is the president of Savant Plant Tech and the co-owner of Samurai Grow Supply in Salem as well.

When I asked Knox about his thoughts on the ban, he said,

“If current opt out counties stay that way and or somehow prohibit the progression of what was already voted in by the majority in Oregon two years ago now, they will without question lose millions to billions of potential tax revenues and furthermore all the typical commerce and massive revenues generated by the Cannabis industry and related enterprises. The very sad part is that a lot of the opt out areas are really the areas in the state that already support huge agricultural communities and it is disgusting and short sided for them to not view cannabis as such… an agricultural crop.”

The event wrapped up with Beau Whitney of Goldenleaf holdings  committing to donate $25K to the Yes campaign and Herbal Remedies, who was also one of the event sponsors, donating $2K, and with fundraiser and ultimately raising around $3K aside from Goldenleaf pledge.  All proceeds went to Vote Yes On 24-404 & 24-405 Political Action Committee.

The PAC meets every Tuesday night at 6:30-8 in Salem at the Taqueria Marcos Place on Union St. They are organizing a phone bank this week with the Willamette University College of Law Students for Sensible Drug Policies Chapter. They will be also organizing volunteers to go to Stayton, Woodburn and Silverton to reach out to voters and distribute bilingual information.

For more information or to get involved, look here: www.VoteWillametteValley.org

A big thank you to the event’s sponsors: