My name is Randy Quast and I am NORML’s new Acting Executive Director. Let me be the first to welcome you to a new era at NORML.

I’m from Minnesota. My background is in business. I worked my way up in trucking, starting with my family’s small 10-employee trucking company in the 1980s. I worked in various departments of the company and eventually became president and CEO in 1988. By the time I sold the company ten years later, it employed 700 people in 23 service centers in 10 Midwestern states and had revenues over $50 million a year.

After retiring, I turned my love of flying into 2,500 flight-hours. I volunteered myself and my airplane to AirLifeLine to fly patients who couldn’t afford commercial flights to receive medical treatments. I eventually became the president and CEO of that non-profit until we merged with another similar organization. The combined companies still operate today under the name Angel Flight.

Coming Out of the Closet

But throughout my previous careers, I had always been a regular marijuana consumer — a corporate stoner, if you will. But like many in similar positions, I kept that information private. It wasn’t until 2007 that I was forced out of the cannabis closet and into the arms of NORML.

While out for dinner one evening a thief broke in my home and dragged my safe, where I stored my marijuana, out the back door. When neighbors confronted the thief, he ran, leaving the safe in the middle of my back yard.

When I came home, there were cop cars all around my home. I’d left an aluminum one-hitter in the bathroom. That led to cops’ suspicions about what was in my safe. That led to a search warrant and a SWAT raid of my home. The three ounces in my safe led to a felony possession charge.

Because I was fortunate to be a white person and able to afford an attorney, I received a stay of adjudication with two years’ probation. When my probation ended in 2009, I attended my first NORML Conference in Portland, Oregon. I then returned home to start Minnesota NORML in 2010. Recently, I moved to Oregon in 2015 and co-founded Portland NORML.

Now, I’m in Washington, D.C., working to take National NORML into the next era, one that includes continuing the fight for legalization in places like Minnesota and includes expanding the rights of legal cannabis consumers in places like Oregon.

Positioning NORML For the Future 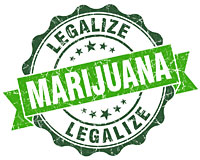 NORML has formed a search committee to find a new, permanent Executive Director. In the interim, we’re continuing our important work. We’re educating lawmakers and judges on the scientific truth about cannabis, public policy, and health.

We’re are also working with congressmen and senators on Capitol Hill to pass legislation needed to secure banking and tax relief for our legal marijuana industries.

On the state level, we’re working with legislators to reduce marijuana penalties and to increase patients’ access, while also organizing municipal initiatives to permit social use and to mitigate criminal sanctions.

In the past few months, we’ve witnessed many successes on the state level. Three states have enacted legislation to permit medical marijuana access while many others have expanded access to greater numbers of patients. Many states have amended their laws to significantly reduce penalties for the possession of marijuana or cannabis paraphernalia, while other states have taken steps to authorize the growing of industrial hemp.

As we look forward to the future, specifically this November, we realize that our role is more important than ever. With voters deciding on nine marijuana-specific ballot measures, this election is the most important in recent memory. And the results of Election Day hold the potential to transform American public policy.

So, as I begin this new chapter at NORML I ask all of you to join me. Please help usher in this new era by making a donation today of $50.00 or more to NORML. Your donation will help assure that we continue to play a necessary role in shaping public opinion and policy in such a way that puts the needs of responsible marijuana consumers first. As the nation continues to engage in this ongoing narrative regarding legalization, there exists a greater need than ever for politicians, media, and policy analysts to seek guidance and expertise from NORML with regard to the benefits of regulation as well as the health and societal effects of responsible cannabis consumption.

I’m excited to do my part to make NORML the best organization it can be and I hope you’ll join me.